There are many ways you can support the ministry:

Pray for the ministry, for the meetings we travel to and the work and witness Mission Teams teams as they travel to Africa. Pray for the outreach part of the ministry as we seek to present the gospel. Make kids4school a regular part of your private and church prayer time.

Why not try and get us a meeting at your church or group? Or put us in touch with the contact person and we will take it from there.
Click Here

To support a child through kids4school is not expensive but it is an investment in the life of that child. Your sponsorship will enable a child to get an education and have food each day. Contact the office today or fill in a sponsor form and you will be sent details of your child. Sponsor a child and give them an opportunity for a future.
Click Here

All of these real gifts help children and families in Tanzania overcome poverty and disaster. By helping in this way, you become a part of this great work.
Click Here

Would you be willing to organise a coffee morning in support of kids4school?

Hold it in your home or church hall and invite your friends around for cup of tea or coffee?

If so we can supply you with a short, but interesting DVD of the work of kids4school.

Contact the office or fill in the online form.

Up to now we have been shipping these ‘Scholar Packs’ from home, however the Tanzania government have dramatically increased the customs duty so this has made shipping unrealistic.

If you decide to participate in this part of the ministry you can pay the cost and we will purchase items in Tanzania.

This personal gift to a child will become a treasured possession and a useful tool for their education.

Kids4school is working with these schools to provide suitable textbooks, and with your help would like to provide individual ‘Scholar Packs’ for each child to help with their learning. 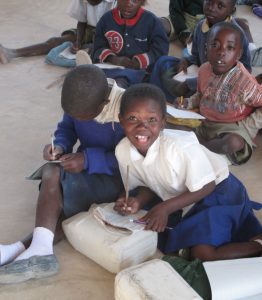 In the government schools in Tanzania where kids4school works, many of the children are without desks and have to sit on the floor.

Part of the ministry and goal of kids4school is that every child should have a desk to sit at and books to work with.

Schools in Northern Ireland are taking up the challenge and very generously are donating school desks to be shipped to Africa.

One such school is Abbey Primary in Newtownards. They have donated a large number of desks which have been stripped down and transported to Tanzania. kids4school, on behalf of the children and schools in Tanzania would like to thank Mrs P Magowan and the staff at Abbey Primary for their support.

These desks are used in local primary schools where many children have to sit on the floor for lack of desks and equipment.

Will your school be replacing their desks this year? Why not consider donating them to kids4school so they can be sent to African schools. 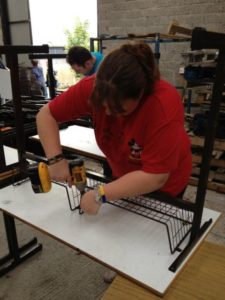 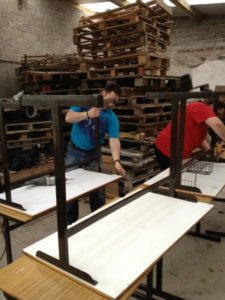 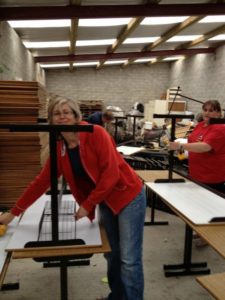 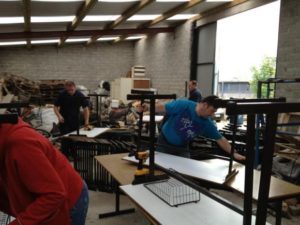 Volunteers in action splitting the desks down so they are easier packed together to ship them in our container to Tanzania.

Support Us and Change the Course of a Child’s Life Today!